Home Unlabelled 25 Signs He Loves You, Even If He Doesn’T Say It Out Loud!

25 Signs He Loves You, Even If He Doesn’T Say It Out Loud!

It’s a question that many of us struggle with in our relationships, so if you’re going through it, you’re not alone: How do you know how he really feels?

Even if things are going great between you and your man, you might have this question in the back of your mind, eating away at you when you should be busy enjoying yourself. Luckily, there’s tons of signs to look out for when you’re trying to figure out how he feels — you just have to know where to look. 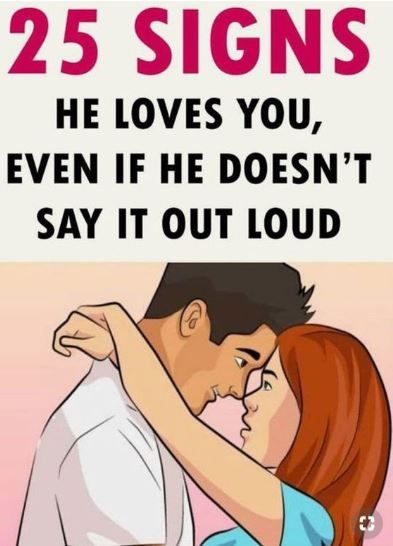 1. MAKING PLANS
If he makes a lot of plans with you, long-term or otherwise, he’s committed.

2. RESPECTS YOU
If he treats you as his equal and doesn’t treat you like a slave, odds are he really cares about you.

3. KEEPS WATCH
He’s not clingy, but he’s always checking on you to see how you’re doing.

4. DOESN’T BRAG
If he doesn’t constantly bring up all the nice stuff he does for you, that means he is doing it selflessly.

5. HONESTY
If he cares about you, he’ll never hide things from you or lie.
6. SELFLESSNESS
Men who care about their partners try their hardest not to be selfish.
7. FIGHTING CLEAN
If he “fights” or argues rationally then he might be a keeper
8. INTERESTED IN YOU
If your man loves you, he’d always be eager to know everything about your day, even the small details.
9. PROTECTIVE
Men who care about their partners try to keep them out of harms way.

10. FOCUSED ON YOU
Men who love and respect you don’t pay attention to other girls.
11. HE AGREES…BUT NOT TOO MUCH
It’s great if a guy agrees with you a lot, but just make sure it’s not too much: If he’s a yes-man, he might not actually be sincere.

12. HAND-HOLDING
Men who are confident in their relationships have no problem reassuring their ladies that they are.

13. CONSIDERS YOUR PLANS.
No matter how much an event means to him, he will always ask you first about it, and never assume you’re free.
14. HE GETS (A LITTLE BIT) JEALOUS
He’ll do his best to hide it, but if you’re talking to other guys, you’ll notice him noticing.
15. HE INVESTS IN YOU
It’s simple, but says a lot: If he gives you the time of day, he’s interested in you.

16. ALWAYS TRUE TO HIMSELF
Does he behave a bit different when you are around, or is he 100% the same when you’re not? If it’s the latter, he cares about you deeply.
17. HE DOESN’T USE HIS PHONE AROUND YOU
Yet another small sign of positive interest in you.
18. HE FINDS SIMILAR INTERESTS WITH YOU
He wants to find things that you guys can do together, so he asks you what you actually like.

19. BIG SMILES
If a guy’s smiling this doesn’t necessarily mean he likes you, but, if you guys seem to smile whenever you look at each other, he may have fallen head over heels.

20. HE IS TRYING TO IMPRESS YOU ALL THE TIME
Because your opinion is the most important opinion to him.
21. GOOD MEMORY
A guy who is into you will remember the things you say, because he’s really listening when you say them.
22. SPLITS WORK EVENLY
The right kind of guy won’t assume you’ll always make him dinner: He’ll love it when you do, and he’ll do it for you too.

25. HE JUST SAYS IT
And finally, and perhaps more importantly: If a guy loves you, then he’ll have no problem just coming out and saying it.