Pimples are a nuisance and some are harder to heal than other. Some people are more affected some are less, no matter which of them you are, now you can see what kind of pimples you have and how to get rid of them easily at home with no additional help. 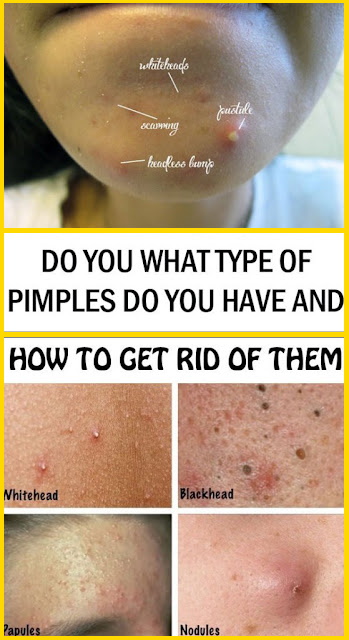 Blackheads and whiteheads.
Sebum, bacteria and dead skin cells clog pores and cause bumps under the skin, either called blackheads or whiteheads. If the pore remains open after being plugged with dirt and sebum, he looks black.

If the pore is closed after being filled with impurities it becomes white.

Both blackheads and white ones are removed quite easily with ordinary products in any pharmacy help if you suffer from other types of pimples.

The papules are hard when you touch them and if there are more of them on one place, can create a feeling that skin is like a sandpaper. Like papules, pustules are yellow and have a kind of fluid similar to the one in blisters.

In some cases, papules and pustules are more difficult to treat, so it is better to go to a dermatologist if you suffer from something like that.

Nodules and cysts
When pores are clogged they swell greatly, and infection spreads deeply in the skin. Nodules are hard and quite painful, white cysts are soft and contain pus. The best in this case is to consult a doctor, because cysts and mistreated nodules can leave ugly cars on the face and neck.

No need to worry if you be left with a holes or dark spots on your skin after you squeezed a serious pimple. Some pimples heal slowly and leave scars, but few remain on the skin for life. The advice of a dermatologist can relieve your of such unpleasant consequences, so do not start to squeeze the pimples alone.