Home wellness How Your Nails Warn You About Serious Health Conditions

How Your Nails Warn You About Serious Health Conditions

Most people don’t give a lot of thought to their fingernails beyond clipping or painting. However, the shape, texture and color of your nails can all be warning signs for serious conditions, including cancer. While some nail symptoms are harmless, others can be indicative of chronic diseases. 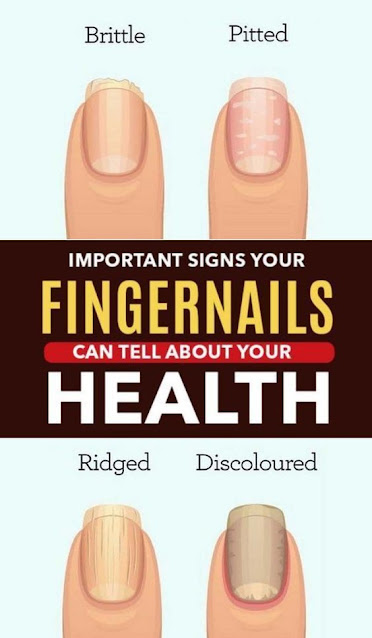 How Your Nails Warn You About Serious Health Conditions

Most people don’t give a lot of thought to their fingernails beyond clipping or painting. However, the shape, texture and color of your nails can all be warning signs for serious conditions, including cancer. While some nail symptoms are harmless, others can be indicative of chronic diseases.

The American Academy of Dermatology (1) notes that changes in nails, such as discoloration or thickening, can point to health problems including liver and kidney diseases, heart and lung conditions, anemia and diabetes.

If you notice any major changes on your nails see a dermatologist right away. While it might be nothing, it could point to a serious underlying condition.

While your fingernails may become yellow with age, due to smoking, or frequent use of nail polish, if they are also thicker and crumbly besides being yellow, a fungal infection is the most likely culprit.

In rare cases yellow fingernails can be related to thyroid disease, diabetes, or psoriasis.

Your nails can become cracked and brittle if you use nail polish remover frequently, or are exposed to chemicals (such as cleaning products).

However, cracking and splitting can also be a sign of a fungal infection or thyroid disease, particularly hypothyroidism. Brittle nails may point to a deficiency in vitamins A, B or C.

If your fingertips become enlarged and the nail becomes curved downward, it may be a sign of clubbing. It can point to low oxygen in your blood, associated with lung disease. In extreme cases, it can be related to liver or kidney disease, heart disease, or even AIDS.

These small white spots are usually the result of nail trauma and are not a cause for concern. They will disappear on their own. However, if they don’t go away, you might be dealing with a fungal infection.

Horizontal ridges, also known as Beau’s lines, are typically the result of direct trauma to the nail. They can, however, be a symptom of a more concerning condition if they appear on more than one nail at a time. These conditions include psoriasis, uncontrolled diabetes, circulatory disease and severe zinc deficiency.

There is a more serious type of horizontal lines, known as Mees’ lines. They are horizontal discolorations due to arsenic poisoning, Hodgkin’s disease, malaria, leprosy, or carbon monoxide poisoning.

If you notice vertical ridges appearing in your nails that you didn’t have before, it’s probably nothing more than a side effect of aging (2). They’re equivalent to getting wrinkles in your skin and usually don’t appear until around the age of 50. Occasionally, nail ridges may be due to nutrient deficiencies, including vitamin B12 and magnesium.

This deformity is definitely visible enough to catch your immediate attention. Known as “spoon nails” (3), they most commonly appear due to an iron deficiency. The nail gets so thin that it becomes concave.

If you notice this, have some lab work done to determine if anemia is the issue. Other causes include working with petroleum-based products or trauma. In very rare circumstances, spoon nails can be associated with thyroid disease and heart conditions (4).

Multiple pits or dents in fingernails is often a sign of psoriasis. However, nail pitting may also be due to connective tissue disorders or alopecia areata, an autoimmune disease that causes hair loss.

Any sort of asymmetric pigmentation can be a sign of skin cancer, but melanoma on nails (called subungual melanoma) usually looks like a pigmented vertical band stretching upward from the cuticle (5). If a brownish streak on your nail bed shows up suddenly or changes in appearance, see a dermatologist as soon as possible.

10. White Nails with a Strip of Pink (Terry’s Nails)

If you notice your nails become mostly white with a narrow pink strip at the top, known as Terry’s nails (6), it could be a sign of liver disease, congestive heart failure, kidney failure, or diabetes. But do not enter panic mode right away, Terry’s nails may appear due to aging.

If you notice that your fingernails are turning into claws and you are starting to grow fur on your hands paws, you are either a cat, or suffering from a very rare disease called clinical lycanthropy (not to be confused with werewolf syndrome). However, these symptoms can also be the result of old age.

Disclosure: While we did try to end the article on a humorous note, please take any symptoms seriously and visit your dermatologist whenever you notice drastic changes on your nails.