Hallux Valgus disease, known as the curvature of the big toe (bump on big toe), is defined as a problem that should be considered when it becomes painful, although it is generally thought to be an aesthetic problem. This disease, which can be inherited, can progress over time due to the wearing of tight, high heels or uncomfortable shoes. 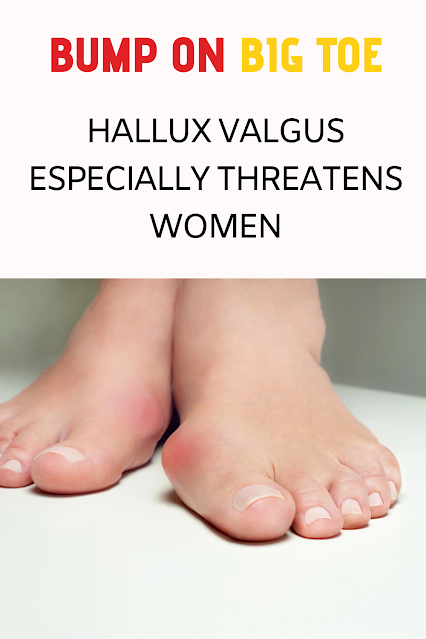 Hallux Valgus is manifested by the bending of the big toe towards the other fingers and the backbone under the thumb protruding in the opposite direction. Hallux Valgus, also known as the bump on big toe, is more common in women.

Choice of shoes is very important

The main cause of Hallux Valgus is genetic, in other words familial inheritance. Those who have bump on big toe in their mother or grandmother are more likely to develop this disorder than other people. This disease is more common in individuals who have a genetic background and wear very high heels and narrow-front shoes. However, flat feet also increases the risk of Hallux Valgus.

The most important symptom is pain and swelling

The most common and complained symptom in patients is the rubbing of the protrusion of the root of the big toe against the shoe and the pain and swelling that develops due to it. As a result of rubbing, swelling increases, as the swelling increases, there is more friction. At the point where friction occurs, calluses form with a large swelling on the bone, called a bunion. This ongoing vicious circle increases the patient’s complaints.

Hallux Valgus disrupts the mechanics of the foot

Wounds and inflammation can also be seen

Expert help should be obtained

The image of the patient’s foot helps in making the diagnosis. In addition, the x-ray film of the loaded foot while stepping on the ground gives the diagnosis certainty. The angles of the thumb to the first comb bone or to the second comb bone are measured with X-ray film. After the angle calculations, the appropriate treatment method is selected.

Relaxing exercises are recommended in the early stages

In the first stage of Hallux Valgus, which has three stages, only an appearance appears in the patient’s foot, but there is no severe pain. In this case, while surgery is not recommended, some relaxing exercises can be planned. First of all, these patients should not wear high-heeled shoes with a narrow front, and should do exercises that allow the thumb to be pulled to the opposite side of the deformity. If the genetic transition is not very serious and there is a slight curvature in the finger, these exercises both relax the muscles and prevent pain and ensure that the situation does not worsen.

In the early stage, patients can also use silicone rollers and orthoses between the fingers. These materials reduce the pain by holding the thumb in the opposite direction of the deformity, similar to exercise.

Bone spurs are filed with a simple surgery

The second phase of Hallux Valgus is the situation in which the patient’s complaints increase, but the thumb is not bent too much and the angles of the comb bones to each other are not disturbed, only the bone protrusion comes to the fore. In this case, a simple surgery is performed in which only the bone protrusion is ripped and the muscles that cause the thumb to bend are relaxed.

In patients with high angles of the comb bones, bone correction surgery, which is a third step treatment, is applied. In other words, the thumb and comb bone correction operation is performed. If the correct surgery is performed according to the type of the patient, the possibility of recurrence of Hallux Valgus is quite low.

Patients stay in the hospital overnight or can be discharged on the same day after bone resurfacing surgery. Plaster is generally not applied according to the degree of deformity after surgery. Patients can step on their feet healthier from the third week onwards. After the first month of the operation, they can wear normal shoes, and they can start their normal walks after one and a half months. It is necessary to wait 4 months for long and fast walks and jogging, and 6 months for sports such as football and basketball.

The goal after the operation is to ensure that the patient can walk in a healthy and painless manner, exercise painlessly after at least 4 months and especially wear the shoes they like.