Home Unlabelled How to Get Rid of Prickly Heat (Heat Rash)

How to Get Rid of Prickly Heat (Heat Rash)

Oops, it’s suddenly hot. Now it’s time to show skin if it weren’t for the pustules. Heat rashes are annoyances that we would like to get rid of. We say how!

Prickly heat (heat rash) is mainly associated with babies and small children, but adults are also affected. The good news first: heat rash is absolutely harmless to health. But they can bother us, cause a nasty itch and burn on the skin surface and cause inflammation. The rashes particularly like to spread to parts of the body where there are many sweat glands. These include above all armpits, décolleté, back, bottom, thighs and arms. In places where we definitely do not need them, and if they are already there, we cannot always cover them completely with clothing.

Babies and small children are particularly prone to heat rash, as the skin pores are still relatively small, which can quickly cause a blockage of the sweat glands. The rashes are then primarily caused by wearing too warm and thick clothing or by wearing a diaper. 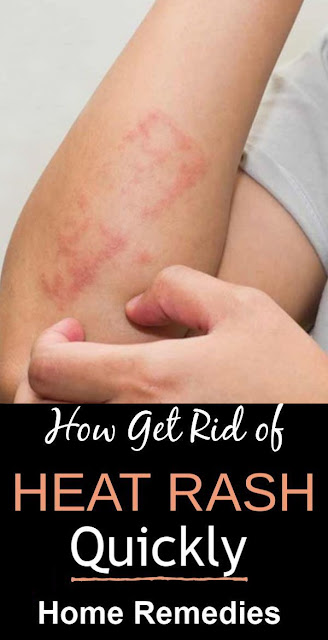 What is heat rash?

Prickly heat is small blisters/pustules on the skin that develop when the ducts of sweat glands become blocked. Frequently, in summer, when there is heat and high humidity, therefore they are often called heat rash or sweat pimples. They often occur in skin folds or areas where there are particularly many sweat glands, such as in the armpits, around the décolleté or between the shoulders.

What types of prickly heat are there?

There are four types of prickly heat, each with different symptoms.

What symptoms does heat rash bring about?

The skin rash is mainly manifested by

The vesicles are usually as large as a millet grain and are located on the surface of the skin, or more precisely: where one has many sweat glands and therefore perspires frequently. Usually the heat rash is filled with a clear to milky liquid. Depending on how clogged the sweat glands are, the rashes can be very painful and cause a burning or itching sensation on the surface of the skin.

What to do about prickly heat?

If you are prone to heat rash, you can also prevent them: enzyme peelings gently cleanse even sensitive and impure skin and prevent clogged sebaceous glands.

In case of severe itching, especially small, red spots (Miliaria rubra), a doctor should be consulted. After an examination he can give you an anti-itching anti-allergy medication (antihistamines). to treat the heat spots. As a rule, a zinc-based cream is also often prescribed because it has an anti-inflammatory effect, supports wound healing and reduces itching.

It helps babies to change diapers more often to avoid a humid and warm climate. Even if they crawl more often without diapers, it prevents super heat rash.