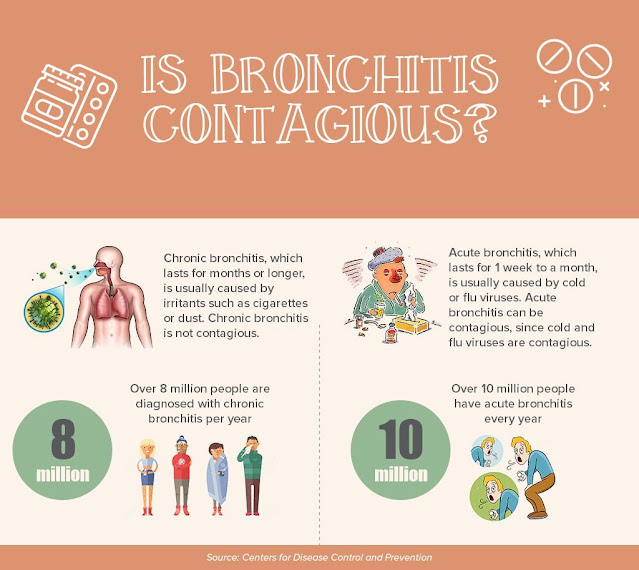 When is bronchitis contagious – and how can I protect myself from infection? We reveal the answers to these and other important questions.

Is every bronchitis contagious?

Whether or not bronchitis is contagious depends on the form of the disease. Acute bronchitis is usually triggered by viruses (rarely also bacteria) during or after a cold and these are contagious. Chronic bronchitis, on the other hand, is not usually caused by pathogens, but by smoking or contact with irritants and harmful substances, for example. This form is considered rather noncontagious.

How can I become infected by acute bronchitis?

Pathogens that cause colds, colds, bronchitis and the like are classically transmitted by droplet or smear infection:

Do we always catch bronchitis?

However, whether the disease actually breaks out and symptoms appear after infection depends primarily on how strong or weak the immune system is. If it can fend off the pathogens, we remain healthy. There are also certain risk groups that are more likely to become ill – these include children, the elderly and people with a general immune deficiency. Due to the so-called hyperreactivity, a bronchial hypersensitivity, bronchitis also occurs more frequently.

How long is infection possible?

The highest risk of infection with bronchitis is directly after the outbreak of the disease. And the risk lasts for a long time – usually until the cough with sputum, which is characteristic of bronchitis, has healed. It can take up to two weeks for the mucus from the bronchial tubes to be completely expectorated, or even longer in severe cases. If the cough does not improve noticeably within this time, a doctor should be consulted: If there is an acute bronchitis, it can turn into a chronic bronchitis.

How can I protect myself from infection?

The best protection against infectious diseases is through increased hygiene. The following measures reduce the risk of infection: