Mullein was once known as a robust medicinal herb that treated a variety of ailments, such as respiratory tract infections. Nowadays, mullein is considered a bothersome weed that grows along the roadside, but the flowers and leaves of the mullein plant are potent.

Mullein has been used since ancient times and, while the popularity has ebbed and flowed, it’s hard to dispute the evidence that it’s an effective treatment for many issues. Herbalists know that the leaves, roots, and flowers can be used to treat diarrhea, asthma, coughs, and lung-related sicknesses. 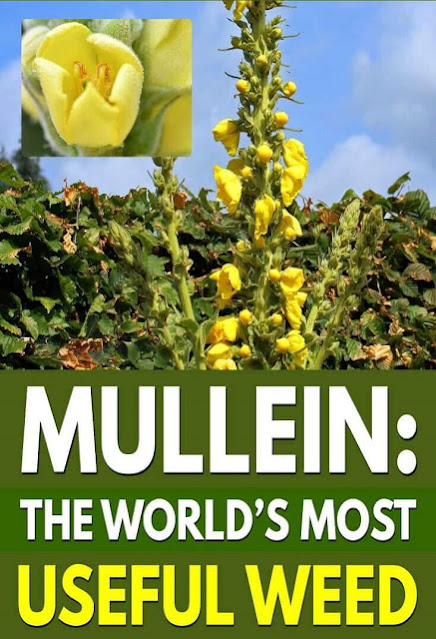 Traditionally, mullein can be used in various forms, including the treatment of bruises, burns, hemorrhoids, and more. You can apply mullein topically, or you can ingest it or smoke it. In the Appalachia region of the United States, mullein has been historically used to treat upper airway infections.

Are you surprised? Mullein might be one of the world’s most useful weed, but it also seems to be a hidden secret as well.

Mullein is an herbaceous plant with large, grayish-green leaves and bright yellow flowers throughout the summer. In the fall, mullein produces egg-shaped, pale brown fruits.

Originally, mullein was native to Asia and Europe, but it was introduced to the United States in the 1700s. Today, it is naturalized across the United States. Some people call this plant big taper, velvet dock, and lungwort.

So why is mullein such a useful and strong plant? Here are a few features that you should know.

Mullein’s leaves and flowers are believed to act as expectorants or demulcents. Demulcents are substances that can help soothe the irritation or inflammation in your skin or internally in your throat, mouth, or nose. Expectorants help to stimulate the secretion of phlegm.

Let’s take a look at a few medicinal uses of mullein.

Some studies show that using mullein has a better response than using amoxicillin. Its effectiveness could be because mullein has emollient and astringent properties so that it can work as effectively as anesthetic drops.

You can also use mullein oil to treat a dog’s ear infections and other health problems. Not all herbs are considered animal-safe, but you can use mullein on animal friends as well.

Have you ever heard of bursitis? It’s a painful condition that involves small, fluid-filled sacs that cushion the bones, muscles, and tendons near your joints. Bursitis is the inflammation of the bursae, which are those fluid-filled sacs. You might experience bursitis in your shoulders, elbows, and hips.

As you might imagine, bursitis can be excruciating, and mullein is a natural treatment. You can make a mullein tea and soak a cloth into the tea. Then, apply that tea-soaked cloth to the affected area to decrease inflammation.

Some researchers have found that mullein can kill certain types of bacteria, including Staphylococcus aureus, which is responsible for staph infections.

That’s why herbalists use mullein to treat a variety of infections such as bronchitis and upper respiratory tract infections.

If you have upper respiratory problems, such as a sore throat, bronchitis, dry cough, tonsillitis, or hoarseness, mullein tea can be used to improve the ailments. Mullein leaves contain antioxidant and anti-inflammatory properties that help to get rid of mucus while soothing inflammation inside your body, such as your throat.

Some people, instead of using tea, prefer to smoke mullein to treat respiratory issues, but you do need to be careful if you have asthma issues. You can put dried mullein in a pipe and smoke it to treat chest congestion.

Many people don’t know that you can also use mullein root to help with urinary infections and urinary incontinence. Mullein root strengthens and tones the trigone sphincter at the base of the bladder. Overall, taking mullein can help to enhance the bladder function while decreasing the frequency of urination.

At the same time, mullein root has mild astringent properties, which can reduce inflammation in the bladder. It doesn’t overstimulate or irritate the bladder.

Here are some additional uses for mullein that go beyond their medicinal uses:

Mullein works as a nitrogen fixer, which means that it can be used to heal even the worst of soil conditions. If you have bad soil, consider throwing mullein in first to see if that solves the problem.

You can also use mullein in addition to your compost to help fertilize your soil. Let’s put it this way: mullein is good for your soil and it never hurts to use it in regards to gardening.

Most birds enjoy the seeds of mullein. Rather than simply throw the seeds to your mullein weeds away, leave them out on your deck or place them in a bird feeder for the local birds to enjoy.

Dried mullein leaves make excellent tinder and kindling for getting fires started. When you come across mullein leaves in the wild, collect and stuff them in your pockets or in your pack. Then when the time comes to build a fire, just strike a spark or flame onto the leaves from a magnesium flint striker or a match. Assuming the leaves are dry, you should have no problem getting a small fire going.

The stalk of mullein is surprisingly sturdy and can be used to create a friction fire using the fire bow method. You can use the stalk for the bow itself or for the spindle.

You can place mullein leaves inside your shoes, and they will provide cushioning to help reduce blisters. If you ever find any mullein leaves out in the woods while hiking or in a survival situation, don’t hesitate to pick some up to bring with you.

Not only can mullein be used to cushion your feet, it can provide essential warmth to your feet as well. Granted, you’re probably not going to find any mullein weeds in a winter survival scenario where there is snow on the ground. But even in the spring or summertime when it gets cold out at night, you can collect mullein leaves and stuff them into your shoes or boots for additional warmth.

Here are a few ways to prepare mullein.

To make your mullein tea at home, here is what you need.

Pour the boiling water over the dried mullein and allow the mixture to steep for 10-15 minutes. Drink the mullein tea 1-4 times per day to help kick a sore throat or upper respiratory infection.

Making tinctures is easy. Fill up a jar with vodka and soak your dried mullein for 3-4 weeks. Leave the jar in a cool, dark place to let it steep.

Then, strain out the tincture. Mullein tinctures can be taken 3-4 times per day. The recommended dose is 1/4 to a 3/4 teaspoon to help beat upper respiratory infections and other internal infections.

The most popular way to use mullein is an oil that you can put into your ears to cure ear infections. For ages 1-10 years old, apply one drop, and for those over ten years old, use two drops of slightly warmed ear oil 2-3 times per day.

Mullein flower oil is often mixed with infused garlic oil, which is another naturally antibacterial and antiviral oil. It can boost the effectiveness of this weed.

Put 1 cup of mullein flowers with 1/2 cup of olive oil in a double glass boiler over a low flame. Slowly heat the oil over the low flames for three hours. Then, remove the oil from the heat and allow it to cool down. Strain the oil by using cheesecloth to remove all of the plant parts. Store in a dark glass bottle and seal tightly.

If you have plenty of time to make mullein oil, the cold extraction method works well. All you have to do is cover dried mullein flowers in a glass container with olive oil. Cover with the lid and put the jar on a sunny windowsill, letting it steep for 7-10 days. Then, strain and store it in a dark glass bottle.

You can make a poultice by grinding dried flowers and leaves into a fine powder. Then, once you have the powder, mix with water to create a thick paste.

Then, spread this poultice on the affected area, covering with gauze. Some suggest covering the poultice with plastic wrap. Native Americans heated mullein leaves and applied them directly to the skin.

If you use mullein properly, it’s unlikely to cause unwanted side effects. Doctors have never noted a severe side effect, but there are some isolated case reports of contact dermatitis from mullein plants.

The one thing to note is that you should never use ear oil if your eardrum is perforated. Always consult with a physician if your symptoms don’t improve with a natural treatment.

If you’re pregnant or breastfeeding, you might want to speak to your doctor to know if it’s safe for you to take. There is no evidence to point to mullein being safe or dangerous for pregnant and breastfeeding women.

Mullein is one of the most useful weeds that you can grow, but it has lost its fame over the past decades. Herbalists are working on bringing the fantastic properties of mullein out in the forefront. More and more people are turning to mullein ear drops as a way to cure ear infections instead of turning to antibiotics.

Mullein doesn’t stop at ear infections. It can be used to treat everything from coughs, sore throats, bronchitis, asthma, and more. Use a mullein compress to treat an external infection.

You might be surprised by how many ways there are to tap into mullein, but it can come to the rescue. Give mullein a try and add it to your list of go-to herbal remedies.