Home Unlabelled 13 Signs That Someone Is Hiding Their Anxiety

13 Signs That Someone Is Hiding Their Anxiety

Contrary to popular belief, there are actually plenty of people in the world who are struggling with anxiety. In fact, anxiety is one of the most common mental disorders in modern society. More than 1 in 13 people actually suffer from anxiety on a global level according to the World Health Organization. 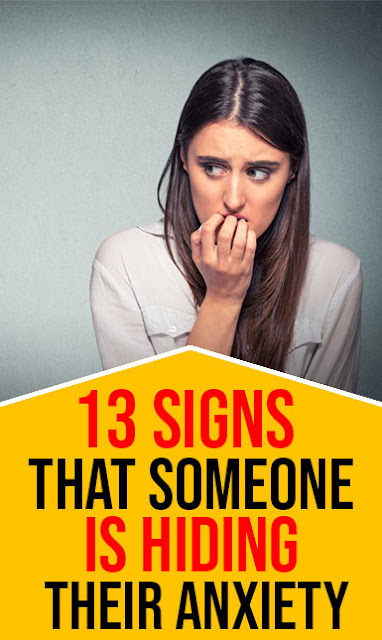 There are varying levels and degrees of anxiety that can bring with it a fair share of various symptoms. Some of the most common symptoms associated with anxiety include:

If it gets to a point wherein anxiety is making a negative impact on other aspects of your life such as your career or social life, it’s important that you seek therapy or professional help. The sad news is that even though many of us struggle with anxiety, only a little over a third of these people actually seek help. This statistic is consistent even in developed countries.

So, it must be likely that you have met someone who is suffering from anxiety but looks completely normal and at ease on the outside. They look like they have everything in control but they are getting eaten up on the inside. And if left unchecked, that turmoil could eventually lead to a dramatic breakdown.

Whenever you find out that someone you love is struggling with anxiety, then you always want to make an effort to reach out to them. You want them to feel like you are there to support them and help them deal with their troubles. But the key is in identifying the people who are suffering from anxiety in the first place. If you notice a few of these signs in a loved one, it is likely that they might be suffering from anxiety.

1. They will seem very fake or insincere in the way they conduct themselves.

2. They will seem very fidgety and restless.

3. Their minds will seem very scattered and fickle.

4. They will sweat a lot more than most other people.

5. They will be forgetful or absent-minded a lot.

6. They will seem controlling and rigid.

7. They will have symptoms of depression as well.

8. They are more likely to engage in substance abuse involving drugs, alcohol, and the like.

9. They will make an effort to avoid anxiety triggers.

10. They will lose themselves in their work.

11. They will have unhealthy eating habits – either they are not eating enough or they’re eating too much.

12. They will conduct themselves poorly in relationships.

13. They will isolate themselves from other people.

As is already evident, whenever a person attempts to hide their anxiety, it can really affect the other aspects of their lives in ways that can be damaging and destructive. Anxiety is a highly treatable condition but not a lot of people will actually be honest with themselves to acknowledge that they need to be treated. There are plenty of people out there who will continue to suffer in silence.

If you happen to deal with anxiety yourself, or if you know someone who is dealing with anxiety, then always be open-minded about the idea of seeking professional help. Anxiety is like quicksand. Just because you aren’t doing anything to deliberately worsen your situation doesn’t mean that things aren’t getting worse. You need to grab a lifeline or a rope that you can hold onto.

Self-care is very important in this modern world where everyone is always speeding at a fast pace.