Home Unlabelled Everything You Need to Know About Psoriasis

Everything You Need to Know About Psoriasis 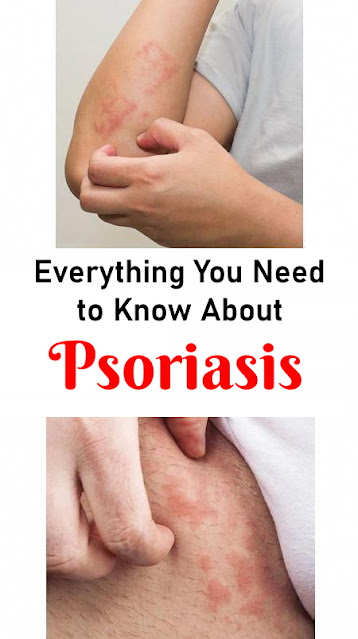 Psoriasis is a skin disease that makes people suffer. We explain what can help patients with psoriasis.

Psoriasis is the medical term. The name derives from the Greek term “psao” (I scratch) and makes clear the main symptom of the skin disease. Psoriasis manifests itself in strongly dandruff, point-shaped to palm-sized skin changes (often at the knees, elbows and scalp, skin areas that are often stretched) as well as changes in the nails (nail psoriasis).

Psoriasis can also affect other organs, especially the joints, associated ligaments and adjacent soft tissues, as well as the eyes and the vascular system. About 8 million people in the USA have psoriasis.

When does psoriasis occur?

In principle, anyone with a genetic predisposition can get psoriasis at any age. However, an outbreak in early childhood and in older people is rather rare. The main age group for the first onset of the disease is between the ages of 15 and 25. But even between the ages of 50 and 60 there are still first symptoms, but then psoriasis is not as pronounced. Statistically speaking, men and women fall ill about equally often.

The causes of psoriasis

In psoriasis, the cells incorrectly receive the information that there has been a serious injury to the skin. The skin of a healthy person renews itself within approx. 26 – 27 days. For people with psoriasis, this time is reduced to 6 – 7 days. The skin cells are shed seven times faster than normal and the skin layer renews itself incorrectly. The superfluous cells die and become visible as scales.

It is not clear why this misinformation occurs, but it seems to be genetically determined. However, in addition to the predisposition, there must be other triggers for the psoriasis to break out. External factors include injuries or pressure, internal problems of the psyche, stress, alcohol or medication. Infectious diseases, metabolic disorders, hormonal factors and other environmental influences can also be triggers.

In psoriasis, the aged skin cells form silvery, shiny, coarse scales that have a sebaceous consistency reminiscent of candle wax. The underlying tissue, the lowest cell layer of the epidermis, is strongly supplied with blood due to the increased growth and therefore appears under the easily removable scales as a strong reddening.

People are also fighting for acceptance of the disease on social networks. Under the hashtag #Psoriasis, affected persons and organizations post pictures that openly show skin changes. Psoriasis sufferers suffer most from the stigmatization and fear of their surroundings of being infected. The more informed people are, the less anxiety there can be. This is why it is so important to show what psoriasis really looks like.

What helps with psoriasis?

Since there are different forms of psoriasis, the therapy is also very diverse and an accurate diagnosis is important. People with psoriasis also have a predisposition to suffer from rheumatoid arthritis, “psoriasis arthritis”. Pustular psoriasis”, for example, forms fine blisters instead of psoriatic scaling. In addition to normal psoriasis, orthodox medicine distinguishes a total of five other major types of this disease. Psoriasis is not curable and a therapy can only be expected to alleviate the symptoms.

Many affected persons are prescribed the drug Methotrexate by their dermatologist. It is supposed to suppress a pathological activity (hyperactivity) of the immune system. However, Methotrexate is only used when the drugs of the first stage (e.g. cortisone) are no longer effective or the cortisone is to be replaced permanently due to its side effects.

It can be taken over many years with regular monitoring of blood values and organ function. Patients should be informed intensively about side effects by their doctor.

The symptoms of patients with moderate and severe psoriasis can be relieved significantly and quickly (within a few weeks) thanks to biologicals. Biologics are biotechnologically produced drugs that prevent certain messenger substances from being activated by the body’s defenses. They can prevent the defence cells from initiating inflammatory reactions and reduce the number of pro-inflammatory substances in order to stop the pathological reaction of the body’s own defence system.

A cause for concern: Biologics intervene in the immune system and weaken it. As a result, patients are less well protected against infections. The possible side effects of these drugs are considerable (for example, an increase in liver and blood fat values) and do not appear to have been sufficiently researched.

The active ingredient Ciclosporin is also a suppressor of the immune system. It is frequently used after transplantations, but also achieves a high degree of effectiveness in severe psoriasis. However, drugs containing Ciclosporin are only recommended for short periods of time.

Possible side effects include damage to the kidneys, liver and gastrointestinal tract. The drug may also cause gum proliferation, hirsutism (strong long hair growth on the body), edema and high blood pressure.

For certain skin diseases, the irradiation of the skin with electromagnetic radiation is mainly effective in the ultraviolet (UV) range. The individual irradiation must be precisely defined by an expert.

During therapy, the patient takes a psoralen-containing medication one to two hours before UVA irradiation, applies a special cream to the skin or baths in a psoralen-containing solution. To enhance the phototherapeutic effect, the light treatment can also be preceded by a bath therapy with salt water.

How does light therapy work in psoriasis? Phototherapy has immunomodulating properties. In light therapy, the cell division rate is reduced by UVA radiation, thus slowing down the scaling of the skin.

What should patients with psoriasis consider in everyday life?

Important: Do not scratch!

No matter how unpleasantly itchy it may be, the rule is: Do not scratch! Because this causes injuries – and fungi or bacteria can penetrate the wounds and cause inflammation.

Tip: Put a good Aloe Vera ointment in the refrigerator and apply it if itching is severe. Provides immediate relief!

Clothing containing silver ions is not only more pleasant on the skin in the case of neurodermatitis, but psoriasis patients also often find it a relief at night, when the itching is particularly disturbing. In general, cotton is better to wear than synthetic fibers for scaly skin.