Home Unlabelled 10 Curious Signs That Someone Is Thinking About You

10 Curious Signs That Someone Is Thinking About You 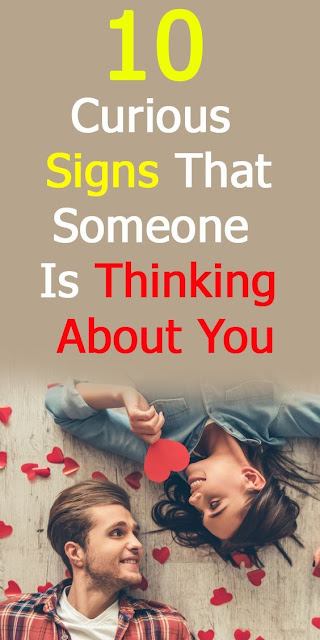 It’s flattering to imagine someone thinking about you. There’s something comforting about knowing you’re on someone else’s mind, especially if there’s a special someone you’re hoping has you running through their head. Naturally, you’d want to know if that’s happening!

Of course, there are other reasons someone might be thinking of you. They might dislike you, or they may even have a dangerous obsession with you. In this case, you’d also want to know so that you can take steps to defend yourself.

Essentially, you’d always want to know if you’re on another person’s mind. But surely there’s no way to do that, right? After all, reading minds is the stuff of fantasy. It’s something you’d see in a superhero movie.

What if I told you that there are psychic energies that reach you whenever someone has you in their thoughts? It sounds far fetched, but it’s true! It’s possible to tell if you’re occupying someone’s mind if you know what to look for.

In different Asian countries it is believed that sneezing is one of the signs that someone is thinking about you. And in fact, they go a little further.

Needless to say, if you have a cold, this belief doesn’t apply 😛

Has it ever happened to you that someone tells you: They are thinking about you, your ears are red? In several South American countries this is a widespread belief.

In fact, you don’t even need someone to tell you. It is very easy to feel your ears getting warmer and realize what is happening. However, you must remember that feeling hot ears can also be due to other causes.

It is also believed that another sign that someone is thinking about you is that you get stinging or involuntary eye movements.

It doesn’t mean that your eyes go crazy and start twitching all over the place. Just a subtle twitch is enough.

It is even believed that if you have any of these symptoms in your left eye, someone is thinking bad things about you. But if it’s the right eye, they are thinking positive things; to the point of being romantic thoughts.

If you believe that there are people who have a certain energy, that they can infect or steal from others, it is very possible that you believe in this.

Some beliefs assure that we are energy and that our brain can manipulate it; to the point of changing the energy of others. So if you think about someone a lot, that person will feel an energy that is foreign to his or her own.

Why do we smile out of nowhere? Well, this belief is also related to energy.

The body does what the brain tells it to do, it is undeniable. Therefore, at a subconscious level the brain’s sensations are expressed by the body in some way. And it is believed that when someone thinks of you, you just smile. It’s that simple.

It’s normal to get the hiccups after eating or drinking too much. However, when you get the hiccups “out of the blue,” it’s quite possible that someone is thinking about you. And it is believed, that these are not positive thoughts.

It is also believed that these sudden hiccups, you get close to the person who has those bad thoughts. So the next time you get hiccups for no apparent reason, analyze who is around you.

The meaning of dreams is an extremely interesting topic, because although science has not found how the brain works in its entirety; it is almost undeniable that we dream for a reason.

That makes hundreds of beliefs arise around dreams. And one of them is that if you dream about someone repeatedly, it is because that person’s thoughts manifest in your dreams.

I don’t know if you believe in telepathy, but it is believed that when someone is thinking about you too much, the energy of their thoughts can transmit a message in the form of contact. Like when you want something to come true and your thoughts end up coming to life.

Many people claim to be alone and feel their shoulders being touched or their face being subtly pampered at times.

White feathers are closely related to the wings of angels. It is believed that when you find a white feather, some loved one who has passed on is watching you.

I know it can be sad, but the idea of knowing that we are in the minds of people who love us, even from up there, should be a motivation to be better people and make them proud.

Goose bumps are a reaction generally linked to emotions. That’s why it’s believed to be one of the signs that someone is thinking about you.

So if you’re not watching something that excites you, nor are you cold and you get goosebumps; it’s very possible that someone is thinking about you.