Causes And Tips For Removing Earwax At Home Instantly!

Earwax is yellow waxy substance that is secreted as protective coating and it is found in the passage of the outer ear. The earwax protects the ear from bacteria and other particles or organisms that easily may enter inside and harm this delicate area.

Besides as protection, the earwax acts as a natural lubricant for the ear and the ear canal. 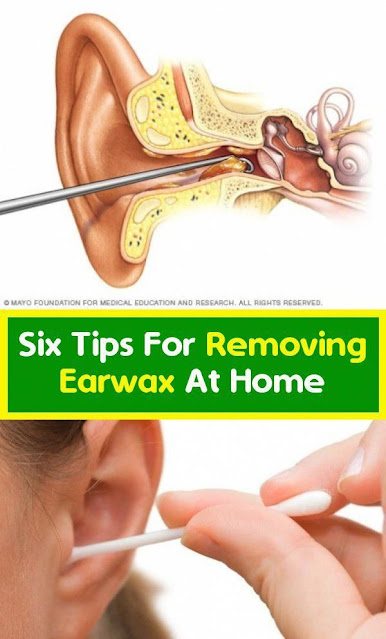 Over time, the earwax accumulates in large quantities and that causes unpleasant feeling of discomfort, but also may cause irritation, dizziness, loss of hearing, a feeling that there’s something stuck in the ear and itching, as well. In order to avoid that, you need to periodically clean your ears and remove the excess earwax.

Before we present you the ways on which you can remove the excess earwax at home, it is of extreme importance to explain what causes the discomfort when there is earwax buildup.


WHAT CAUSES EARWAX TO BUILD UP?

When the earwax forms a blockage within the ear canal, it becomes quite annoying and even irritating. Many of you probably will be surprised, but the blockage actually occurs as a result of regular use of cotton swabs such as Q-tips. So, you consider that you are cleaning your ears, but you actually force and push the earwax much deeper into the ear canal and furthermore it starts to build up.

In addition to that, people who regularly wear earplugs or earbud headphones are at significantly higher risk to have issues with excessive accumulation of earwax.

WHAT ARE THE SYMPTOMS?

If there is too much wax built up in your ear canal, it is most likely to experience some of the following symptoms:

In order to prevent excessive earwax buildup it is extremely important to clean your ear canals from earwax regularly. Experts advise you to avoid using of Q-tips or similar swabs as thus you will create a blockage. Instead, we recommend you to try the following home remedies and remove the earwax efficiently and on completely safe way.

Saline solution is one of the best options for removing the earwax. The procedure is very simple: in 100 ml (½ cup) of water dissolve 1 teaspoon of salt (7.5 g). After that, soak a cotton ball in the resulted solution and tilt your head to one side. Let a few drops fall into your ear and hold this position for several minutes until the liquid penetrates deeply in the ear canal and softens the wax. Then simply tilt your head in the opposite direction and using a tissue wipe the liquid as it drains out.

Paraffin oil is one of the safest but also it is one of most efficient home remedies for earwax removal. You can buy this oil in any pharmacy. And this is the procedure: heat 2-3 tablespoons of paraffin oil over a candle flame. Once the oil becomes a liquid and it is warm enough, drop several drops in your ear and lie still for a few minutes. After that, rinse off the traces of the earwax using warm water. In order completely to dissolve the buildup, repeat this procedure 3 days in a row.

With the help of glycerin you can soften the earwax and remove it super easy. Glycerin is natural products and you can find it in any pharmacy. In order to get best results simply pour 4 drops in each ear, 3 times a day.

In a small bowl combine equal amounts of white vinegar and rubbing alcohol. After that, dip a cotton ball into the mixture and carefully apply a few drops in each ear.

Olive oil is another efficient natural ingredient that will soften the earwax. All you should do is to put 2-3 drops of olive oil in the affected ear before going to sleep. In order to get all of its benefits, try to sleep on the opposite side. Repeat the treatment 3-4 nights in a row.