Home Unlabelled 11 Unbelievable Facts about Sex You Need to Know

11 Unbelievable Facts about Sex You Need to Know

Even for a most experienced person sex sometimes can be confusing. So before having sex we should know the basics of sex.

Some exceptional facts can help a person to improve his / her sex life. So here are a few surprising facts that can help you to get real pleasure and satisfaction during sex. 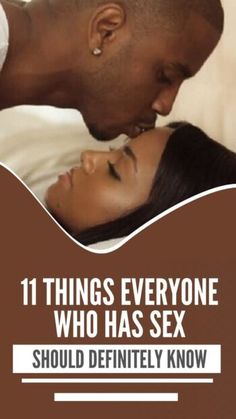 1. If You Have Sex At Least Once Per Week, You Will Feel Happier

Researchers at Toronto – Mississauga University in Canada have discovered that the happiness index of a couple will be the highest if they have sex once/week.

If they do it more than once, the result does not change much, and less than once per week will lead to dissatisfaction.

a recent study by UCLA (USA) and Concordia (Canada) pointed out that adult movies do not impact negatively men’s sexual performance, but even support it. Among 127 male volunteers, those who watch adult movies constantly can awaken his instinct more easily than those who don’t or rarely watch it.

3. Women Often Wait Until the Fifth Date to Have Sex

According to a survey, women will have sex on their fifth date. Women will wait for 2 – 3 weeks before having sex with a man, and 32% of them say the fifth date is the ideal time.

If you want to impress her right on your first date, listen to the opinion of the researchers from Stanford University and the University of California (USA).

Although it’s true that your appearance and characteristics are more influential than what you say, however, the more time you spend with her, the less important those factors get.

Therefore, you should learn some tricks: Smile along when she smiles, sometimes interrupts her, ask her questions to show her your attention.

6. The More Chores a Man Do, the More Sex He Will Have

This could be the New Year’s resolution of many men: Do more housework. A study which has been conducted for 5 years by Alberta University, Canada, indicates that the couples who share housework together have a better sex life than those who don’t.

Therefore, you should pick up the broom and sweep your house now, and later you’ll receive sex as a thank-you gift.

7. If You Have Sex Frequently, You Can Earn More Money

At Anglia Ruskin University in Cambridge (UK), the researchers have concluded that those who have sex 2 to 3 times per week earn 4.5% more than those who have less sex.

Why? According to Dr. Nick Drydakis, having frequent sex improves your mood, helps you avoid depression and anxiety from outside, thereby work more effectively, which leads to a higher salary.

A study published in Evidence-Based Medicine will help men know how to make his online profile more impressive. Firstly, you should avoid negative-sounding words such as Soft, Small.

Secondly, you should not choose a name like Six Pack because women prefer sophisticated and intelligent names. Besides, there should be at least one picture of you smiling and squinting slightly.

There is an interesting fact that if in your picture, a girl smiling with you; it will make you much more attractive to women.

Scientists from Wooster University in Ohio (USA) conducted the experiment by recruiting a total of 21 heterosexual men between the ages of 18 and 23 to watch seven sexually explicit videos in a private room every 48 to 75 hours for 15 days.

In the first six videos, nothing changes, but in the seventh one, the main actress is replaced. The findings revealed that the time it took participants to ejaculate ranged between four and 21 minutes.

When it came to the first six films, there was no habituation effect, which means repeatedly viewing the same woman did not increase or decrease the time to ejaculation.

However, they ejaculated faster and with higher quality when viewing the seventh film, which included a new woman.

10. All Women are Bisexual

From a survey of 345 women watching sexually provocative videos, they are easily inflamed by both sexes; lesbians, on the other hand, are indifferent to pictures of men, and straight men only react to naked women.

11. Beer Belly does not affect Your Sex Life

The good news of the year: a recent study indicates that men’s looks are not related to the frequency they have sex.

Scientists at Chapman University, California (USA) have shown that women prefer not too tall guys, and your height is also not related to your abilities in bed, AT ALL. And they also prefer little overweight men to skinny ones. So, go and love your fridge!