People are gradually getting used to the fact that they should take proper care of themselves to sustain good health and prevent possible diseases. We pay enough attention to body parts but very often, we miss small areas. However, their importance shouldn’t be belittled. For example, the armpit area can hint at having certain diseases.

We take care of our health and that’s why we want to share a list of symptoms with you that can appear in the armpit zone that that shouldn’t be ignored. 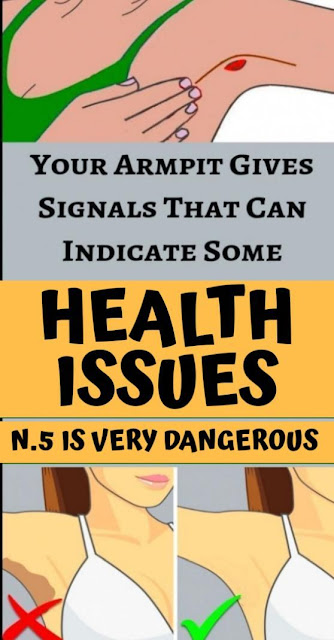 Having a sour smell in the armpit area is a natural occurrence. It might happen because of bacteria that feel free and comfortable to grow in the zones with a lot of sweat. But, we all happen to know that it is actually quite easy to fight such a smell — just take a shower and use deodorant. But in case your armpits’ smell is steady and strong, it’s the first sign of having potential health issues.

Having some unusual smell that can not be removed even after taking a shower can be a signal of a hormonal disorder and thyroid dysfunction. If this smell resembles the scent of “rotten fruit” or like “nail polish”, then it could be a signal of ketoacidosis — the loss of the body’s ability to metabolize the sugar.

Once more, feeling itchy in the armpit area after shaving is normal due to the growth of new hairs. But in case the itchiness doesn’t stop, it’s yet another signal that there is something wrong within your body.

Having some severe irritation may be caused by the reaction of the skin to the razor, clothing fabrics, and substances that creams or deodorants contain. Some red spots and dead cells usually appear together with such itchiness. In case this happens, there is a chance your skin has a fungus that should be treated by a doctor.

It’s actually always quite warm and humid in the armpit area, creating the perfect environment for reproducing various yeast infections and is impossible to learn what infection you’re suffering from if you do not check with a specialist, which is the reason why you should address a doctor if you suddenly feel itchiness, redness, and small rashes on your skin. Such kinds of skin reactions can also be caused by friction from clothing, climate or allergies.

Experiencing some painful feelings appearing in the armpits are no reason to rush to the doctor right away. This pain might happen due to hard physical labor after intensive training or after carrying heavy things. For these cases, it is always temporary and will disappear soon.

But, if your painful feelings last for quite a while (for example, several days), then you should seek a consultation from a doctor. Even though it happens rarely, this pain can signal about a formation of tumors in the lymph nodes.

The lymph nodes that are located in the armpits are completely invisible, but in case you to spot some kind of sealing and swelling, it can signal about the fact that these are actually trying to fight some newly appeared infection by themselves. This situation will in turn normalize without outside interference after some time.

Nevertheless, you shall definitely consult a doctor in case the inflammation hasn’t disappeared by itself within a week. It might happen to be a worrisome sign because swollen lymph nodes are a signal of a serious infection and sometimes even cancer.

It’s quite normal to sweat a lot if you’re doing intense physical activity but not if you’re sitting, walking or sleeping. These are signs that should alarm you. Hyperhidrosis might as well mean a dysfunction in the levels of hormones that can be signaling an onset of menopause. What is more, having excessive sweating is one of the signs of diabetes and gout.