7 warning signs of a brain tumor

Brain is the chief-organ, which instructs your body, what to do and keeps under the control all processes, including your breezing, heart working, cognitive performance, appetite etc. These regulating center locates in your skull and gives a net of nerves to each part of the body. 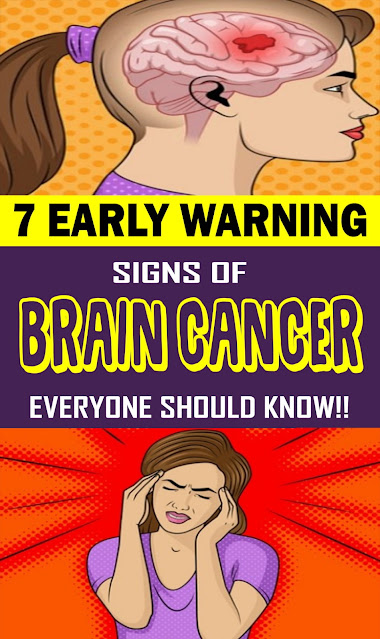 Cranium bone, three membranes (meninges) and special fluid protect gentle, soft brain tissue from possible damage. There are three main parts of the brain: the cerebrum, the cerebellum and the stem.

The cerebrum consists of two hemispheres, which control your emotions, speech, motions,sensations, memory, vision and speaking. The cerebellum is situated behind and below the cerebrum. It helps you stay coordinated and well-balanced.

The stem joins the cerebellum to the spinal cord and is responsible for breathing and heart beating. You probably know that cancer is one of the leading causes of premature deaths in the world.

Cancer may be defined as uncontrolled growth and multiplication of abnormal cells that can occur in any body's area. If these abnormal cells tend to grow slowly and don't spread to other organs and tissues, the condition is called benign tumor.

Malignant cells, in turn, propagate intensively and have ability to metastasize to near and/or distant parts of the body. Even today it's not clear enough, why do cancer develops. Specialists say that genetic predisposition, environmental factors and person's habits all together play a great role in this problem.

In the majority of cases brain cancer is secondary-developed condition, meaning that cancerous cells get to the brain from other organ, where malignancy primary occured. However cells can also start and progress in the brain tissue, leading to formation of the primary brain tumor.

Symptoms of the brain neoplasm may vary, depending on its location, size and type of cells, in which it begins. The most common of them include:

#1. Headaches – severe frequent headaches, which get worse in the mornings, may indicate overgrowth in the brain tissue.

#2. Convulsions – seizures are involuntary motions of the muscles, which occur because of anomalous electrical activity in the brain. The problem can manifest in single muscle spasms or general twitches, accompanied by faint.

#4. Impaired mental function – loss of concentration, impaired memory and impaired intellectual capabilities may be caused by progression of the brain cancer.

#5. Nausea and vomiting - they usually happen in the morning and are accompanied by dizziness and lightheadedness. People with the brain malignancy say that vomiting don't bring them any relief.

#6. Loss of balance – difficulties with coordination may occur, if neoplasm puts pressure on the cerebellum or ruins its cells.

#7. Paresthesia and other changes of feelings – brain tumor may cause numbness, tingling, and other unusual feelings in any part of your body.