Eating eggs is a fantastic way to give you a health boost. According to WebMD, each egg only contains 75 calories and is packed with 7 grams of protein, 5 grams of fat and 1.6 grams of saturated fat. Not to mention it contains iron and other essential vitamins and minerals. If you’re not eating eggs on a regular basis, here are 6 things that will happen to your body when you do. 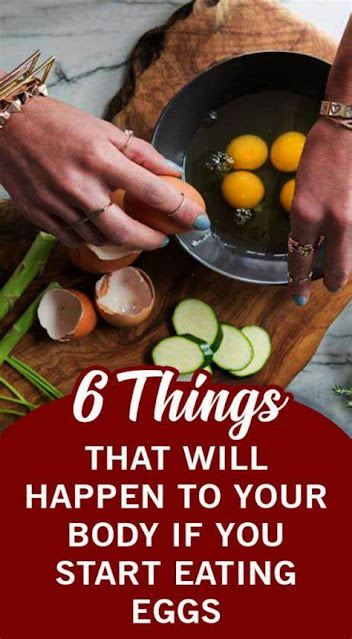 Boost Your Weight Loss: Did you know that eating eggs can actually boost your weight loss? Many people are surprised when they hear this because they’ve been told that eggs are unhealthy and fattening. But a study done by the Rochester Center for Obesity Research found that eating eggs for breakfast actually helps limit your calorie intake throughout the day by over 400 calories. Researchers from this study concluded that by just eating eggs for breakfast, you could lose three pounds a month. The reason why eating eggs can help limit your calorie intake is that they curb your appetite.

Help Your Body Prevent Breast Cancer: Research that was conducted by Harvard University found that eating eggs as an adolescent could help prevent breast cancer. You’re probably wondering how that’s possible. Researchers at the University of North Carolina found that choline, which is in eggs, can help reduce breast cancer by 24%. The daily intake recommendation for choline is 550mg for men and 425 mg for women. One egg contains 125.5 mg, so if you consume two eggs, you’re almost halfway to consuming your daily intake.

Reduce Stress and Anxiety: A study was published in 2004 in Proceedings of the National Academy of Sciences, and researchers found that when people had sufficient lysine sources in their diet, their stress and anxiety levels were reduced. The researchers believe that lysine modulated the serotonin in the nervous system. Can you guess what food has high amounts of lysine?

Protect Your Eyes: There are two types of antioxidants in eggs – lutein and zeaxanthin – they both have protective effects on your eyes. Both these antioxidants are found in the yolk. What these antioxidants do is reduce the risk of cataracts and macular degeneration. A study published in the American Journal of Clinical Nutrition found that participants who consumed 1.3 egg yolks per day for almost five weeks increased their blood levels of zeaxanthin by 114-142%, and lutein by 28-50%.

Lower Inflammation: Eggs contain dietary phospholipids – compounds which have huge effects on inflammation according to studies. In fact, a recent study published in the journal Nutrients found that there was a connection between dietary intake of egg phospholipids and choline and the reduction on inflammation. By lowering inflammation in the body, you reduce the risk of cardiovascular disease, according to Paul M. Ridker, director of the Center for Cardiovascular Disease Prevention at Harvard-affiliated Brigham and Women’s Hospital.

Protects Your Liver: As mentioned already, eggs have high levels of choline. A review was published in journal Advances In Nutrition, and it explained that choline deficiency is linked to the build-up of hepatic lipids, which have the ability to cause non-alcoholic fatty liver disease. The good news is that a study found in the Journal of Nutrition found that women who had high choline diet lowered the risk of experiencing non-alcoholic fatty liver disease.