8 Underwear Rules to Live by for a Healthy Vagina

Your pantie guidebook to cleaning, wearing, and living.

Do you ever think to yourself, “Am I doing this underwear thing wrong?” It may be an integral part of our routine, but it’s not something the average person knows much about.

Like, did you know that there are certain fabrics that are healthier for you or certain times that going commando is better or that there’s sort of an expiration date for underwear?

These unspoken underwear rules can have an impact on your vaginal health — and, depending on the style, can even affect your mood!

So we did a lot of research, dug through several underwear hygiene studies, and talked to an OB-GYN to collect eight underwear rules to live by. 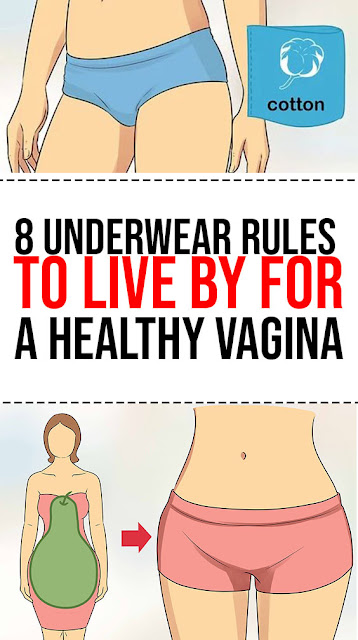 You may have heard this before, but with all the cute styles in a variety of fabrics out there, it’s worth saying again: cotton is the best underwear fabric.

“The vulva is a very sensitive and delicate area, similar to the lips on your face. You want to treat [it] gently,” explains Dr. Alyse Kelly-Jones, board-certified OB-GYN.

And the most simple, gentle fabric to touch your skin? Yep, cotton. It’s also breathable and absorbent, which can help prevent yeast infections.

“Since it is healthy to have a vaginal discharge — similar to the moisture you always have in your mouth — you want your underwear to gently absorb any extra moisture,” explains Kelly-Jones.

Synthetic materials like nylon and spandex don’t allow the area to breathe. Instead, they trap heat and moisture, creating a perfect breeding ground for yeast infections.

2. Aim to change your underwear every day, even more than once if you want!

It seems like we typically wear one pair of underwear a day and then put it in the laundry to be washed. That may not always be necessary. On the other end of the spectrum, you shouldn’t feel restricted to just one pair per day.

Some doctors say that you can get away with wearing a pair of underwear two days in a row if there’s not much discharge or sweat. But if you start to feel uncomfortable because of vaginal discharge buildup, you can change them more than once a day, as Kelly-Jones reminds her patients all the time.

“Many of my patients are bothered by this moisture and wear pantie liners all of the time,” she says. “I think this is not the healthiest of behavior as liners can cause chafing and irritation. Cotton-lined underwear will solve this problem, and it’s OK to change more than once a day.”

After they’ve been worn, toss them in the hamper to wash. Unlike jeans, underwear shouldn’t be reworn just to save on doing a load.

3. Go commando at night to air out the moisture

There’s a lot of debate about whether or not going underwear-free to bed is better for you.

For those who have a healthy vagina, either choice is fine. For those who deal with regular yeast infections, going pantie-free to bed can make all the difference.

Going without a cloth barrier allows the area to breathe overnight and keeps moisture from building up or creating an environment for bacteria to build.

“I believe the vulva area should be exposed to the air, just like any other area of your body,” says Kelly-Jones.

If you really don’t like the feeling of being naked, Kelly-Jones recommends wearing loose-fitting pajama bottoms. Just remember, if you’re going without underwear but are wearing another type of bottom, they need to be washed frequently as well.

Basically, it doesn’t hurt to go without underwear overnight.

4. Well-fitting, moisture-wicking underwear is best for working out

Again, whether to go pantie-free or not when working out is a personal preference. If you’re wearing shorts that have moisture-wicking underwear built into it, you can forgo the underwear.

Wearing something between you and the fabric may be more comfortable and an even healthier way to catch the sweat. Typically, this would be a high-tech polyester that’s light and slick.

If you do choose to wear a pair, Kelly-Jones notes, “The most important thing is to make sure it fits well and doesn’t cause chafing.”

It’s always been assumed that thongs can’t be good for the health of your nether regions.

ATrusted Source2005 studyTrusted Source looked directly at string underwear and found that the microenvironment of the vulvar skin didn’t change at all due to the style of underwear. The underwear had no effect on the pH, skin microclimate, or aerobic microflora.

A recent study looked at the association of thongs with UTIs, BVs, and YVs and, again, found no evidence supporting the assumption that thongs can cause these issues.

Instead, they concluded that sexual behavior and hygiene choices had caused these conditions.

So don’t be afraid to wear a thong when the occasion calls for it.

6. Wash your underwear in hypoallergenic soap

All types of underwear should be handled more gently then the rest of your wardrobe, not just your special lacy, stringy thongs. This isn’t because they’re your “delicates.”

It’s mostly because they sit up against your more sensitive skin area for long periods of time. Kelly-Jones recommends using gentle, hypoallergenic soap to wash them because “anything soapy or chemical next to the vulva can lead to irritation, itching, allergic reactions.”

The cleanest way to wash your underwear

Pro tip: Concerned about the washing machine? Do a hot water and bleach-cleanse (about 1/2 cup of bleach to a full wash-spin-drain setting) to sanitize the machine before putting your laundry in.

7. Consider replacing your underwear every year

Sounds a bit excessive, especially for something that gets washed so regularly. But according to the Good Housekeeping Institute, even clean underwear can contain up to 10,000 living bacteria.

This is because there’s bacteria in washing machine water — about one million bacteria in just 2 tablespoons of used water! Further, about 83 percent of “clean” underwear contains up to 10,000 bacteria.

Beyond bacteria, there’s a chance your underwear could contain feces. According to Dr. Gerba, who told ABC News in 2010, “There’s about a tenth of a gram of poop in the average pair of underwear.”

Throwing out your underwear every year isn’t the eco-friendliest option, and if you don’t have bacterial problems down there, you may not have to clean out your drawers annually.

But if you do experience BV or other symptoms frequently, experts say you may want to replace your underwear every year.

The best way to wash your underwear

Here are some washing recommendations:

After washing, tumble dry on low heat for 30 minutes: One doctor told the New York Times that tumble drying for 30 minutes or ironing after washing can help minimize new bacteria that’s been picked up during the wash. “The heat from a low dry cycle or an iron was sufficient to get the clothes free of the studied bacteria,” she told the publication.

Sick roommate or family? Don’t mix your underwear in the same load: With bacteria already swimming around in your washing machine, there’s no need to risk more.

Don’t mix contaminated underwear with other pairs or pants if you have BV: This is especially important for people who do laundry less frequently. Do a separate wash to keep the bacteria levels lower and avoid cross contamination.

Wash underwear separately from clothes with other bodily fluids: In hospital settings, wash clothes that have been cross-contaminated (with vomit, blood, urine, etc.) separately. Do the same with your underwear, especially if you have family members who work in a hospital. If there are other fluids, focus on getting the blood or vomit out of the clothes and keeping them away from garments that you wear up against your private parts.

8. The style of underwear can affect your mood

Even though it goes unseen (for the most part), underwear can actually play a major part in how you feel.

In a U.S. nationwide poll from by ShopSmart, 25 percent of self-identified women revealed that their moods were affected by “unattractive” or ill-fitting underwear.

They also discovered that almost half the women polled (47 percent) felt sexier or more confident when wearing a special pair of underwear.

Don’t underestimate the power of your most intimate garment or think that just because nobody sees it, it doesn’t have to look awesome.

If you’re ever feeling a little down, turn to your sexiest pair of panties. Like a power pose, it could give a nice confidence boost.