Home Unlabelled Everything You Need to Know About Unilateral Sore Throat

Everything You Need to Know About Unilateral Sore Throat

Usually, unilateral sore throats are harmless. We will explain to you which signs you should however act quickly.

We all know a sore throat when a cold is approaching. But what is it about unilateral sore throat, what signs give cause for concern and when does an ENT doctor have to deal with it? We clarify! 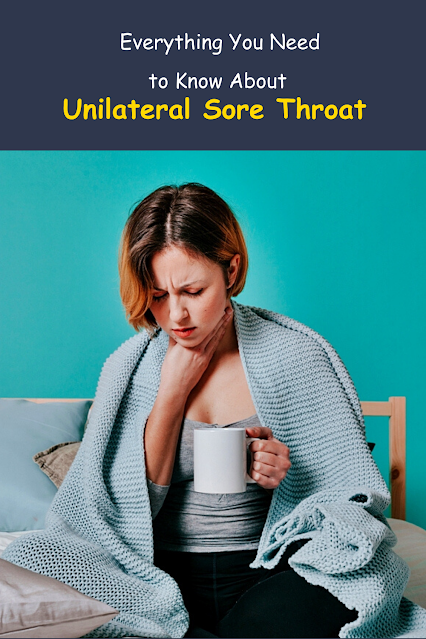 If you have a one-sided sore throat, here’s the good news: In the vast majority of cases, the pain occurs as a side effect of a harmless cold. It scratches in the throat, we feel limp, we have difficulty swallowing, the nose runs, the body temperature rises – a common cold passes quickly and, if we allow ourselves enough rest and patiently cure the disease, it is usually harmless. Here are the best home remedies for a cold. But unilateral sore throats can also be a symptom of serious illnesses.

The sufferer feels a scratching in the throat and suffers from coughing, difficulty swallowing, bad breath and swollen lymph nodes. Inflammation of the throat is a virus-induced infection, but can become a superinfection if bacteria also accumulate.

In a lateral pharyngitis (angina lateralis), the lymphatic channels in the lateral posterior pharyngeal wall are primarily affected. Angina is often a consequence of colds, as the lymphatic channels are already weakened and can be more easily colonized by pathogens. If only one of the lateral tracts is affected, the patient suffers from asymmetrical sore throat. In addition to sore throat, earache often occurs, which can develop into an inflammation of the middle ear due to the connection between the ear and throat.

In tonsillitis, one or both tonsils are reddened, swollen and covered with a yellowish-white coating. Those affected complain of sore throats on one or both sides, difficulty swallowing, sometimes fever and pain that can radiate to the ear. Tonsillitis requires urgent medical treatment not only because it spreads to other organs, but also because a tonsillar abscess can develop.

Inflammation of the throat, angina of the lateral cords and tonsillitis can lead to abscesses if the inflammation spreads into the adjacent tissue. As a result, an accumulation of pus forms which becomes encapsulated, i.e. an abscess. If the abscess has developed behind the tonsils, it is a retrotonsillar abscess. If the abscess lies in the connective tissue of the tonsils, it is called a tonsil abscess or peritonsillar abscess.

The patient suffers from unilateral sore throat, earache, difficulty swallowing and sometimes has difficulty opening the jaw. An abscess needs urgent medical treatment and is opened by the ENT physician under anesthesia and with the use of antibiotics. A tonsil abscess (peritonsillar abscess) often results in the removal of the tonsils.

Inflammation of the larynx or vocal cords

If hoarseness occurs in addition to sore throat, you could suffer from an inflammation of the larynx or vocal cords (laryngitis). Laryngitis is either caused by viruses, overuse of the voice or external influences such as smoking or dry air. Now it is called: spare the voice, which in plain language means that talking (even whispering!) is absolutely forbidden.

Pfeiffer’s glandular fever is caused by the Epstein-Barr virus. The typical symptoms are similar to those of tonsillitis: Sore throat, problems swallowing, fever, loss of appetite and enlarged lymph nodes. Absolute bed rest is now called for to avoid serious secondary diseases such as inflammation of the middle ear or heart muscle.

Tumors in the area of the neck or thyroid gland can be responsible for unilateral sore throat. Particularly in the case of additional symptoms such as hoarseness, coughing up blood and difficulties in breathing, absolute caution is required and a visit to the doctor is urgently needed.

Unilateral sore throat: When is a visit to the doctor necessary?

If your sore throat occurs together with a cold, there is initially no need to worry. Your throat wall will quickly recover from the unpleasant pain. However, if you notice the following symptoms, it is better to make an appointment with your doctor quickly:

Even though sore throats are in most cases only a side effect of the cold, they are unpleasant. Besides prescription drugs, honey can also be and neck sweets help against the sore throat.