Home Unlabelled Why Married Men Fall In Love With Other Women

Why Married Men Fall In Love With Other Women

Ever since childhood, we feed on the notion of fairy-tale-like marriages and happily-ever-afters. But, seldom do these dreams come true. Sooner or later, the brutal reality hits us and shatters the dream. As time passes, a relationship built with passion and love can go haywire.

Even in the most perfect of marriages, one faces situations that may test their relationship. Many a time, the husband ends up falling in love with another woman, making him doubt the credibility of his marriage. 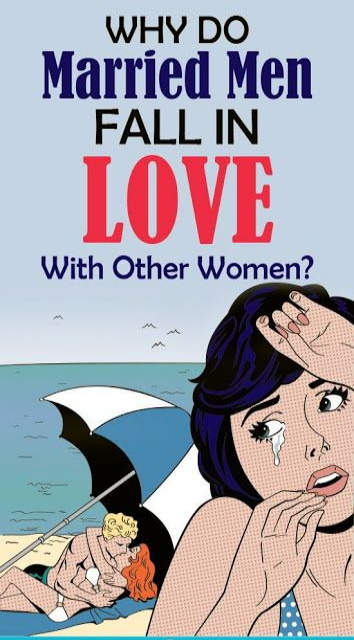 The question of why a man would cheat has often disturbed a woman. People cheat for a multitude of reasons and relationships are complex in themselves; not that it can be an excuse for a partner to cheat. Here, we talk about eight probable reasons why a man would be ready to risk his married life:

1. He Can’t Deal With Tears
A man can find his woman’s cry extremely disturbing and unsettling. It often puts him in a spot, making him feel guilty, responsible, and weak. Since a man feels uncomfortable around tears, he begins finding ways to run away from all the whining. Thus, creating a distance between him and his significant other.

2. The Lure Of The Forbidden Fruit

Often, a husband ends up cheating on his wife only because it is off-limits. He can just be lured by the high of indulging in something forbidden and sinful, not realizing what is at stake.

3. He Feels Underappreciated
A man always wishes for his wife to be happy in life. He will put in efforts to make her feel cherished and secure. However, if his significant other fails to appreciate and value this quality, he feels a void. With doubts about his marriage yielding any happiness at all, he starts seeking another partner.

4. Back To Adolescence
Married men come to a phase where they might make the spouse feel like a parent – be it making excuses to stay out late, being overprotective about their phone, or rebelling against duties of a committed relationship. Husbands usually struggle through this phase of second adolescence, at times, leading them to stray.

5. He Is Looking For A Change
After a few years into the marriage, a man can find himself feeling bored of the status quo (existing state of affairs). The stability of the relationship might make him feel stagnant instead of secure. In an effort to spice up his life, he might stray in search of an extramarital affair.

6. He May Show Signs Of Narcissism
More often than not, partners who cheat lack empathy. Whenever a husband cheats, he has a tinge of narcissistic quality in his personality. He does not think through the consequences of his actions on his loved ones. Because, at that moment, he is more bothered about looking for his own happiness, even if it is at the cost of hurting others.

7. He Is Looking For Someone Who Understands
Generally, men find it hard to express themselves. Hence, it is important for them to find an understanding life partner; someone who will be there for them through their thick and thin. If a husband fails to find a non-judgmental and understanding friend in his life partner, he begins looking for it elsewhere.

8. He Wants An Independent Woman
A man does feel strong when his wife depends on him for small things like opening the jar lid or fixing the kitchen light. However, a husband feels happier and more relaxed when his significant other has a life of her own – be it having her own job, hanging out with her own set of friends, or breeze through a few household chores like a pro.

Couples can decide to move forward after an affair, either together or apart. It depends on the individual’s value system, ability to forgive, and patience to work through their differences. However, what is essential is to communicate openly with each other and learn from it.