Lumps on the neck or behind ears are a rather common issue. The ways we react to this problem differ from paying no attention to getting worried and anxious. In some cases, these lumps are caused by acne or lipomas and are not really dangerous. But there are cases when neck and ear lumps may signal more dangerous or even life-threatening health issues. 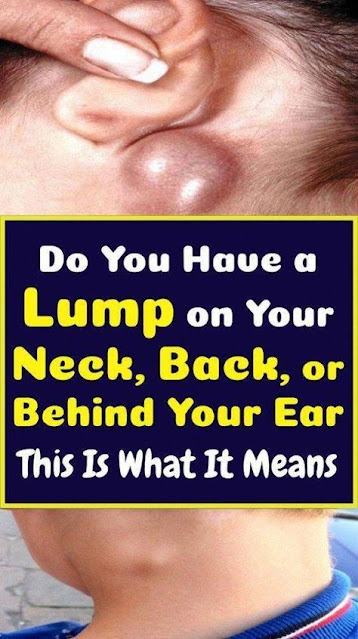 we’ve studied the most common reasons for neck and ear lumps to appear, and here are the things you need to check first if you notice these lumps.

1. Have the lumps checked for cancerous cells.

Lumps on the neck toward the back may be caused by nasopharyngeal cancer (NPC) being spread to the lymph nodes in the neck. These lumps are usually not painful, but they shouldn’t be ignored. Other symptoms of NPC may include impaired hearing, nasal blockages and nosebleeds, blurred vision, facial pain, or numbness and headaches. Even if you have no symptoms except for lumps on your neck, schedule a visit to a doctor to exclude the most severe cases.

Lumps behind the ears may also accompany some types of cancer, like skin cancer, for example, or can be caused by benign tumors. Both malignant and benign lumps may be painless and can grow in size with time or remain the same. No matter what size your lump is, consult your doctor to find out what the lump really is and have it treated or removed.

2. Have your lymphatic system checked.

Lymphadenopathy may cause the enlargement of lymph nodes in different parts of the bodyincluding the neck, the area around the ears, and under the arms. If you notice that any of your lymph nodes are enlarged and swollen, it’s better to visit a doctor no matter where the swollen nodes are located.

Enlarged lymph nodes in the neck, under the arms, or in the groin are common symptoms of Hodgkin Lymphoma, the type of cancer that starts in white blood cells, or lymphocytes. Other symptoms of the disease may include night sweats, weight loss, fever, and a persistent cough. Even though in most cases swollen lymph nodes may be caused by infection, it’s better not to ignore this symptom and have the nodes checked as soon as possible.

3. Have your body systems checked for infections.

Viral and bacterial infections often cause swelling and lumps around the neck and ears. The most common infections causing lumps behind the ears include mononucleosis, strep throat, chickenpox, and measles. Some of the infections may cause mastoiditis or the inflammation of the mastoid bone found behind the ear. Mastoiditis, in turn, causes the diseased bone to protrude and form a lump behind the ear.

4. Check if your lumps are caused by sebaceous cysts.

Ear and neck lumps may be caused by sebaceous cysts. These cysts form in damaged or blocked sebaceous glands that produce oil coating our skin and hair. Due to traumas like scratches, wounds or acne, sebaceous glands or their passages may become impaired, which in turn causes a cyst to form. Doctors usually diagnose the cysts during visual examinations, but in some cases, additional testing may be needed.

These causes for neck and ear lumps shouldn’t be ignored. Only a doctor can say what your lumps are and whether or not they need treatment or removal. So, no matter what your other symptoms are, if you notice a lump on your neck or ear, you are better off visiting your doctor.