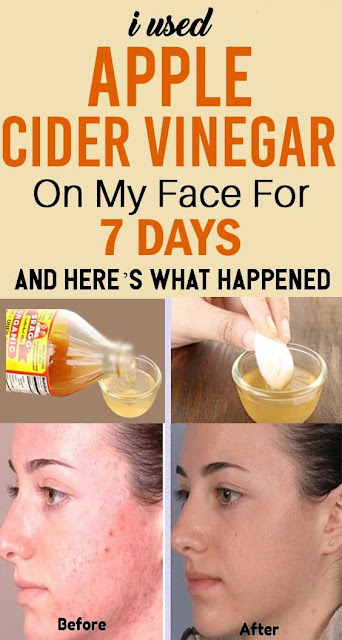 Have you ever heard of apple cider vinegar?

Now, you may have heard of the product, but have you considered using it as a product on your face? Probably not. Well, now you don’t have to waste your time trying it because I tried it for you! For seven days straight, morning and night, I used no name apple cider vinegar that was $1.99 at Shoppers, and my regular face wash: Clean and Clear Essentials: Foaming Facial Cleanser.

Before I tried this product, I had no new pimples, but some that were under the skin. The pimples were very red and irritated, dry and flakey in some spots, mostly on the cheeks and beside the nose. So, everyday I took a cotton pad and put some vinegar on it as if it was a toner, added some water to the pad in order to dilute it, rubbed it gently all over my skin and let it sink in and dry, and then followed up with just an everyday moisturizer.

In the morning on the first day of use, I found the scent a bit strong, but I got used to it pretty quickly. Once it soaked into my skin, it felt very soft. After, I continued with my regular moisturizer and makeup routine.In the evening, I used a cleanser to remove my makeup and used the vinegar.

In the morning I actually noticed that all the pimples that were under my skin had significantly shrunk, and the redness had subsided a tiny bit. I continued with my same routine. At night time my skin was a little dry after taking my makeup off, so I used a light exfoliate and used the vinegar again. I didn’t use any additional product.

When I woke up on this day, the pimples were virtually gone and no new ones had risen. I have some scarring on my cheeks from beforehand, and I found that it wasn’t as red but it was all still there. At night time my skin felt so soft and I didn’t use any additional product.