“Cancer is awful. It took 10 years until I didn’t think about it every day. Nobody should go through this. Nobody.” – Hans Rosling Like all other cancers, cervical cancer happens when there are abnormal cells that develop. In this case, these cells develop in the cervix. All women can be at risk of developing cervical cancer, and when these cells grow out of control they can be managed or detected with a Pap smear test. 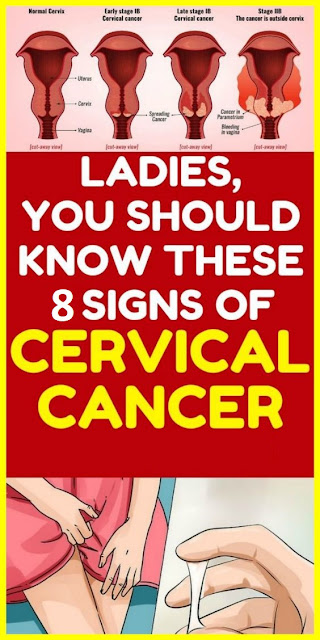 According to Mayo Clinic, “Various strains of the human papillomavirus (HPV), a sexually transmitted infection, play a role in causing most cervical cancer. When exposed to HPV, a woman’s immune system typically prevents the virus from doing harm. In a small group of women, however, the virus survives for years, contributing to the process that causes some cells on the surface of the cervix to become cancer cells.” When it’s discovered early enough, cervical cancer can be treated with success, like many other cancers. The important thing is to be aware of the signs of cervical cancer so you can get checked out and improve your chances of getting successful treatment.

1. Leg Pain With Swelling
Not all leg pains can be attributed to cervical cancer, this is true. However, barring a recent workout or injury, leg pain that cannot be attributed to something else may very well be a sign of cervical cancer, especially if the leg pain comes with swelling. According to Unity Point Health, “As cancer grows and becomes more advanced, it may start to press against nerves in the pelvic wall, resulting in leg pain and sometimes swelling.” Therefore, if there’s unattributed leg pain, it’s important to get checked out.

2. Abnormal Vaginal Discharge
Any abnormal discharge should be looked at by a gynecologist as soon as possible. All vaginal discharge should be colorless and mostly odorless, though you may very well smell some faint ‘body’-like a smell. However, if the discharge is a strange color or smells strong, it’s important to get that checked out. But why does this happen? According to Unity Point Health “If cervical cancer lacks oxygen, some cells may die off, infecting the tumor. The infection creates a foul-smelling vaginal discharge which serves as another symptom of cervical cancer. This continuous discharge may be pale, watery, brown, or mixed with blood.” It may not be cervical cancer, but strange discharge isn’t normal in the first place.

3. Vaginal Bleeding
Those who don’t keep track of their menstrual cycle may confuse vaginal bleeding with normal spotting or period blood. However, bleeding outside of the normal period cycle isn’t normal. Women who bleed after sex, or who are postmenopausal, may want to get checked out for cervical cancer, or abnormal cervical cells. Vaginal bleeding is a red flag to something being wrong.

4. Uncomfortable Urination
Women who are prone to urinary tract infections may mistake uncomfortable urination with a UTI. Normal urination should not be uncomfortable, and it should not sting or burn in any way. Based on Unity Point Health, “Blockage of the kidneys can occur from cervical cancer. This blockage will cause urination to become uncomfortable and sometimes difficult. You may even experience frequent urges to use the restroom without cause.” Therefore, if urination becomes uncomfortable or painful, getting checked out with a physician is the first step. While it may be nothing as serious as cancer, it’s still a sign of cervical cancer that shouldn’t go ignored.

5. Sex Is Less Enjoyable
This doesn’t have to do with your libido, but rather has to do with how comfortable, enjoyable or painful sex is. If sex suddenly becomes painful, it could be an indication that you have cervical cancer. If painful intercourse happens abruptly and with no other explanation for it, you may just be experiencing an overgrowth of cells in your cervix.

6. Pelvic Pain
When women have their menstrual cycles, pain from cramps that radiate out from the pelvis is rather normal. Pelvic pain in and of itself isn’t an immediate sign of cervical cancer. However, when the pain becomes extremely intense or lasts for longer than the menstrual cycle, this could be a red flag for cervical cancer. According to MD Anderson Cancer Center, “Ongoing abdominal pain or discomfort — including gas, indigestion, pressure, bloating and cramps — can signal ovarian cancer. And, constant pelvic pain or pressure can be a sign of endometrial cancer.” You will want to get checked out for an abnormal pain in the pelvis, especially if other symptoms are arising.

7. Weight Loss & Fatigue
If you’re not trying to lose weight, then you will always want to get checked out for sudden or extreme weight loss, especially if there has been no change in your diet. Coupled with fatigue that you can’t quite seem to overcome, it could be a red flag for cervical cancer. Any change in weight or energy levels should always be checked out by a doctor, especially if you’re having other symptoms that could be attributed to cervical cancer.

8. Infrequent Menstrual Cycles
Most women have pretty regular cycles. Ever 25-28 days seems to be the average for most women going through their cycle. While there may be other reasons, including other health issues, medication or diet, that can cause irregular menstrual cycles, this is also a sign of cervical cancer. Especially if the menstrual cycle has always been regular before, suddenly skipping a month or bleeding longer than usual can be a red flag.